Looking for cast iron cookware on the cheap?

I screened Amazon for cookware that (1) was made of cast iron, (2) sold at a bargain price, and (3) was made in the USA. That screen made my choice simpler straight away by eliminating more than 90% of my options.

Most of the cast iron skillets, grill pans, and Dutch ovens I came across were “designed in the USA,” but manufactured in China. That doesn’t mean in any way that their products are subpar. They simply didn’t meet my criteria for origin.

Most of the French cast iron cookware pieces were twice or three times as expensive as their American and Chinese counterparts. They simply didn’t meet my criteria for price and, because of that, ended up being excluded from my screener.

So here are all the cast iron cookware pieces that did make the cut.

Lodge is an American cookware maker with a long history of making sturdy and affordable cast iron cookware. Founded in 1896 by the Lodge family, the company operates two foundries on the banks of the Tennessee River in the town of South Pittsburg, Tennessee.

The 10.25″ cast iron skillet is one of Loge’s best-selling cookware pieces of all time. And for a good reason. It’s great for searing, sautéing, baking, broiling, braising, frying, or even grilling over a fire.

As I recently wrote in “What Skillet Size Is Right for You?”, a 10.25″ skillet gives you enough space to fry 2-3 eggs, sear 1 large salmon fillet, and reheat 2-3 slices of pizza in. That’s ideal if you’re cooking for a one- or two-person household. For those of you who cook for a family of three or more, my two cents is to consider the 12″ size of the same Lodge cast iron skillet.

It weighs a solid 5.35 lb, measures 16.1″ x 10.6″ x 2″, and comes with a silicone hot handle holder (the handle gets extremely hot). It heats up and holds on to heat really well and works on any cooktop (gas, electric, and induction).

This cast iron skillet is pre-seasoned. To get cooking with it, all you have to do is rinse it under running water, pat it dry with a kitchen towel, and rub it with a thin layer of cooking oil. Any cooking oil will do, so use whatever brand and variety you already have in your pantry.

The best part about it? The Lodge 10.25″ cast iron skillet won’t set you back more than it costs to fill in your car’s gas tank. But use it right, and it will go a long, long way. With the right care, it can last you a lifetime and get handed down in your family for generations.

I don’t know about you, folks, but I can hardly think of a better bargain.

Now that you know all about my obsession with Lodge and their USA-made cookware, you won’t be surprised to see this dirt-cheap and virtually-indestructible grill pan from their foundry show up on top of my list.

Like all Lodge cookware, this 10.25″ cast iron grill pan comes pre-seasoned and ready to use.  Just give it a quick rinse under hot running water, pat it dry, drizzle some of your favorite cooking oil on it, and you’re pretty much all set to go.

With this grill pan, you can make the most delicious steak, chicken breasts, and salmon fillets on any cooktop (gas, electric, or induction). Its surface separates the meat, poultry, or seafood from the fats that render and the juices that drip down from it as it cooks, helping you ensure that your food comes out perfectly grilled every single time—and not stewed or poached.

This grill pan is an especially good gift for those of you who live in an apartment and long for a juicy steak with grill marks, but don’t have the yard or rooftop space for an outside grill. It heats up very evenly and holds on to heat really well, producing the perfect sear on your food.

When you’re cooking with this grill pan, be sure to use a cooking oil with a high smoke point. If you use butter or olive oil, you’ll almost certainly cause them to start breaking down and smoking, which is the opposite of what you want to achieve with a cooking oil.

All in all, cast iron cookware on the cheap doesn’t get much better than the Lodge 10.25″ cast iron grill pan. 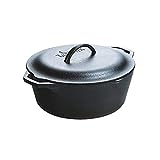 This 7-qt cast iron Dutch oven is made in Lodge’s cast iron foundry in South Pittsburg, Tennessee. It weighs 15 lb, has dimensions of 14.68″ x 12.83″ x 6.93″, and comes with Lodge’s limited lifetime warranty that protects you against manufacturing defects.

Just like all other Lodge cast iron products, this Dutch oven is pre-seasoned. Clean it under hot running water, pat it dry with a paper towel, and you’re ready to cook up a tasty and hearty meal with it for the first time.

Use it to bake crusty bread loaves, cook heaps of chili beans, and deep-fry the most delicious chicken breasts. It’s also perfect for dirty rice, jambalaya, as well as non-acidic sauces, soups, and stews (cast iron doesn’t get along well with acidic sauces like tomato, vinegar, and wine).

Why Is Lodge Cookware So Cheap?

There’s no denying that, if you want to buy cast iron cookware and support American business and not break the bank, Lodge is your number one choice on the market. All of Lodge’s cast iron cookware (except for the enameled pieces, which are made in China) are made in their South Pittsburg foundry in the USA.

But if the cookware Lodge makes is so good, then why is it so much cheaper than most of its Chinese-made counterparts?

First, as long as you have a metal foundry at your disposal and know how to run it (which Lodge does), making cast iron cookware is not that difficult or expensive.

You melt blocks of iron and steel and add chemicals to the mixture to raise its carbon levels. Next, you pour the molten metals in a cast made of sand, powdered clay, and water. When the cast iron cookware piece has cooled down, you break away the cast and release it.

Lodge is cheap to buy if you live in the US or Canada because it doesn’t need to get shipped overseas to ultimately end up in your kitchen.

Cast iron cookware is heavy—and shipping heavy products costs money. By the time Chinese cookware arrives in North America, you’re paying for the production, shipping, as well as for the manufacturer’s, the distributor’s, and the retailer’s markups. That’s a lot of markups to pay.

A Lodge pan doesn’t come in a box. It has yellow use and care instructions printed on a sticker on the inside of the pan.

Yes, cast iron cookware is good for daily cooking, as long as you don’t cook acidic foods in it, clean it by hand with soapy water, and season it a few times an year.

On average, cast iron cookware leaches 1.7 mg/100 g to 26 mg/100 g of iron into your food. Cooking highly acidic foods increases the amount of iron leached by an amount significant enough for you to be able to taste it.

To prove this, some time ago America’s Test Kitchen simmered tomato sauce in a well-seasoned cast iron skillet, testing the sauce for metallic taste every 15 minutes and checking the skillet for damage.

The tomato sauce picked up a metallic taste from the cast iron after simmering for as little as 30 minutes. By that time, the skillet needed a new round of seasoning.

If you do decide to use your cast iron skillet for cooking acidic foods, keep simmering times to a minimum, cook with plenty of water or broth to dilute the acidity of the problematic ingredients, and remove the food from it (for example, plate it immediately or transfer it to a food storage container) as soon as it’s done.

Where Can I Use Cast Iron Cookware?

Thanks to the durability and resilience of cast iron as a material, cast iron cookware is the versatile of all cookware pieces on the market.

Non-enameled cast iron cookware can be used on gas, electric, and induction cooktops. Since cast iron won’t melt up to a temperature of 2,200°F (1,204°F), it’s safe to use in the oven, can even be cooked with on an outside gas or charcoal grill, and can even be placed over a campfire.

Most cast iron pans and pots have bare handles which get extremely hot. To avoid burning your hands, avoid touching hot cast iron cookware without an oven mitt, pot holder, or kitchen towel.

Can Cast Iron Cookware Go in the Dishwasher?

Never clean your non-enameled cast iron cookware in the dishwasher. The harshness of the chemicals and salts contained in dishwasher detergent will strip away your pan’s seasoning, and you’ll need to season it anew.

Instead, wipe your cast iron pan or Dutch oven clean with a damp cloth and dry it immediately and thoroughly using a paper towel. More thorough cleaning can be done under running water and with mild dish soap.

Don’t use scrub pads or steel wool unless, for one reason or another, you want to intentionally remove the seasoning.

Should I Buy Cast Iron Cookware?

If you’re looking for cheap cookware that can last you an entire lifetime, cast iron should be on top of your list. Sturdy, durable, and versatile, you can use cast iron pans and Dutch ovens on your cooktop, in the oven, or the outside grill, and even over a campfire.

For those of you who read this far and don’t want to scroll back up, here’s a roundup of all the cast iron cookware pieces that I recommended in this article:

Now that you saw my picks, which one did you end up buying? And how happy are you with your purchase? Share your experience by leaving a comment below.