Try to think of a more American piece of cookware than the good ol’ cast iron skillet. Sturdy, versatile, and long-lasting, cast iron used to be the go-to choice for pans and pots throughout the 20th century.

While other types of cookware have come and gone throughout the years, cast iron has been with us for a while, and—thanks to an uptick in interest for it as of late—it’s most probably here to stay.

One thing’s for sure: they don’t make them like they used to.

Many cast iron foundries have closed their doors and, with most cast iron cooking vessels on the market not being made in the USA, figuring out exactly which one to buy nowadays can be least to say challenging.

Unless, of course, you’ve read this guide! We’re about to take a look at the American companies that still make cast iron skillets and the things you need to know about each so that you can decide who to buy from.

But, before we get to it, here’s the long story short:

Lodge, which also acquired Finex in 2019, is the oldest and largest manufacturer on the list.

The Field Company, Lancaster, Stargazer, and Smithey were all established some time in the last decade. These small companies employ a few to a dozen employees each and tend to source their materials and services mainly from US suppliers.

Whatever your cooking needs and shopping budget, you can hardly go wrong if you buy your cast iron skillet from one of these companies.

However, each of them has its own story and a unique spin on cast iron cookware that you may or may not like. So it’s good to know what they are before buying from them.

The Field Company is a private American cast iron cookware company founded by two brothers in 2016 and headquartered in Brooklyn, New York.

Its founders, Stephen and Chris Muscarella, named the company after their maternal grandmother. Her side of the family passed down the set of 1930s cast iron skillets that ignited their flame for cookware.

When each of the brothers tried to cook with brand new cast iron skillets, the story on the Field Company’s website goes, they found that they lacked the heaviness on the wrist and solid feel of their vintage counterparts.

“Initially, the Field Company was never meant to be a company. We started by wanting to understand all the secrets of cast iron,” the Muscarella brothers recall.

“We love all the lore, but wanted real answers. We didn’t know if we would make fifty pans in a barn for friends and family or if we would end up creating a larger scale operation.”

So the duo set out to discover the secrets to “great” cast iron cookware.

The Muscarella brothers smelt recycled iron from US sellers and pour single-piece cast iron cooking vessels in green sand molds. “Green sand” molds are made from wet sand containing water and organic compounds, which most of us know as clay.

The Field Company’s cookware is manufactured in Wisconsin and Indiana. It’s pre-seasoned with several coatings of grapeseed oil and ready to cook with as soon as it’s shipped to your door and unpacked.

The brand is known in the cast iron community for its lighter designs, reminiscent of vintage American skillets, and self-basting lids, which turn a sear and sauté-friendly stovetop skillet into a web-heat cooking machine capable of making the most perfect braises.

Finex is a relatively recent cookware brand. It emerged from two wildly successful Kickstarter campaigns in 2012, one of which aimed to secure $25,000 from early adopters and exceeded its funding goal by a whopping 800%, netting pre-sales of $211,027.

For readers who may not be familiar with the name, Kickstarter a crowdfunding platform that allows innovators to pre-sell products before they’re made and supporters to pre-order them for exclusive perks and prices.

Kickstarter enables kitchenware startups to get cash injections to build and ship their first products. On the other hand, it gives cookware geeks early access to handcrafted items and cool gadgets. Some launches on the platform work out, and others fail spectacularly.

Finex is, without a grain of doubt, one of the success stories. 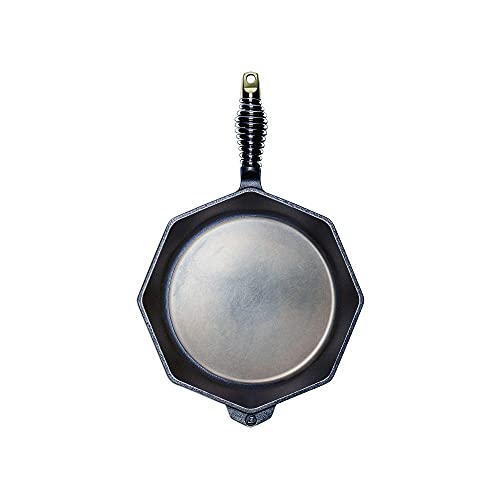 The hexagon shape allows the use of larger spatulas than round pans and turns flipping foods over into a more manageable exercise.

The handles, unorthodox as they are, are built to stay cool for longer. So, as an owner of a Finex cast iron skillet, you won’t need to hold your pan with a kitchen towel or have to get an additional silicone holder.

As part of the acquisition, the production of iron was moved to Lodge’s foundry in South Pittsburg, Tennessee. However, the Finex team and the company’s manufacturing facility stayed in Portland, Oregon.

In 2018, Mark Longenecker and Brandon Moore quit their jobs in a shed manufacturer and an electric vehicle charging station maker to go on a two-month road trip to Alaska and develop a good business idea.

After sixteen thousand five hundred miles and many episodes of “How I Built This,” as reported by Lancaster Online, Longenecker and Moore decided to take a stab at making cast iron cookware.

What made their product different, you may be asking? The fact that, compared to all other cast iron skillets on the market, theirs were the lightest-weight—a trait that continues to set Lancaster’s products apart to this day.

To fund their operations, they also went to Kickstarter and led a successful crowdfunding campaign that had 260 backers who pledged a total of $35,020 in their support.

“The Lancaster skillet is cast, machined, seasoned, and packaged right here in Lancaster, Pennsylvania and surrounding counties,” their pitch to the community of crowdfunders on the platform said. 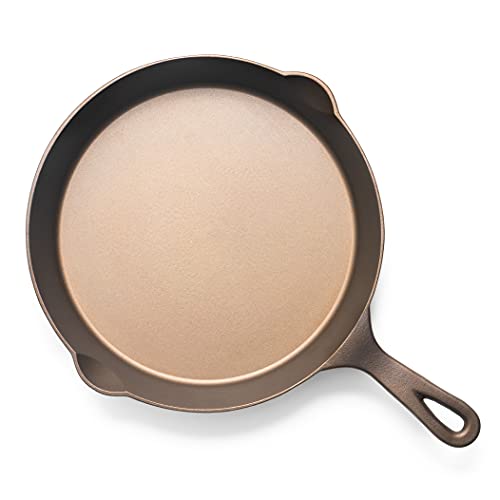 “Paying tribute to past cast iron legends, the Lancaster features a smooth, pre-seasoned cooking surface, a traditional stout handle, large pour spouts, and a lightweight yet strong construction that feels natural in any chef’s hands.”

Today, Lancaster produces lightweight, smooth-finish, cast iron skillets used by thousands of American cooks. Each of their cooking vessels goes through a number of local service providers in Pennsylvania before it reaches your stove.

First, the pans are raw-cast in Boyertown, Berks County. Then, they are machine-smoothed at a shop in Millersville, Lancaster County, and tumbled in York, York County. Finally, Longenecker—with the help of his sister and grandmother—hand-seasons them with grapeseed oil at his company headquarters and, occasionally, at his home.

At first, the company was named Blackrock Foundry and produced a wide range of cast iron products for the home, including cookware. However, a fire sparked and destroyed the original foundry in 1910.

But Lodge and his family wouldn’t give up that easily. Just three months later, his business restarted operations down the road with the new name of Lodge Cast Iron.

Lodge Cast Iron survived the economic hardships of the Great Depression and managed to keep most of its workers employed by introducing novel products, like cast iron gnomes and decorative animals for the garden.

As the US economy bounced back, so did its business. The company got handed down through generations of Joseph Lodge’s descendants, who stuck to tradition while finding ways to grow its customer base and geographic footprint.

Lodge was the first foundry to introduce pre-seasoned cast iron cooking vessels in 2002, a feature that cookware buyers now take for granted. All of its grill pans, skillets, and Dutch ovens are pre-seasoned with soy-based vegetable oil.

In 2019, Lodge bought Finex, marking the first acquisition in its history. The two brands have different product philosophies and target customers—Lodge makes traditional cast iron cookware and sells it at an affordable price, whereas Finex makes high-end cookware with a twist—and we have yet to see how this combination will pan out.

Smithey Ironware‘s creator, Isaac Morton, came up with the idea to start a company while restoring 19th-century cast iron cookware, which he’d have the habit of giving out to family and friends, in his woodshed.

The more vintage vessels he brought back to life, the more he grew fond of the idea to try to produce classic cast iron cookware using modern methods. So he decided to take the leap and make it happen.

In 2014, Morton established the Smithey Ironware Company in North Charleston, the ninth-largest city in South Carolina. And, though there probably were a few bumps along the way, the company has been on an upward trajectory ever since.

At first, Smithey made only cast iron cookware. In 2018, in partnership with the renowned blacksmith Robert Thomas, the company brought a line of carbon-steel cooking vessels to the market.

In 2019, Smithey moved its headquarters and operations to a 15,000-square feet facility in North Charleston’s Navy Yard, the Charleston Regional Business Journal reports.

“I started Smithey with some simple thoughts about what constitutes a piece of premium cast iron cookware,” a message from him on the company’s website reads.

“Surface smoothness, weight, wall angle, handles, and pour-spout dimensions dance around in my noggin more than I care to admit. These elements (and more) are important for you to enjoy a first-rate piece of cookware.”

The traits that set Smithey’s skillets aside are the compact shape and curved sides that make foods easy to maneuver and flip. The elongated handles, on the other hand, help to keep your hands away from the heat.

The pans have a sleek finish and initial seasoning. The smoother finish keeps foods from sticking but also takes longer to develop a “proper” seasoning base through cooking. So be generous with the amount of cooking oil you use in the first few months.

Smithey pans don’t come cheap. On the day of publishing this article, their 10-inch Chef Skillet cost $140. However, existing owners swear by the curved sides’ utility, which allows you to make the most of your skillet, even though you get less flat cooking surface than on other styles of pans.

Stargazer, a small business started in 2015 by professional kitchenware designer Peter Huntley. The story of Stargaze is a classic case of “if you want it done right, do it yourself.”

After years of designing products for others, Huntley grew tired of the cheap materials of overseas manufacturers and the corners that big brands were willing to cut to bolster their bottom line.

In 2015, he set out to try and change that. Six months and 21 designs, and many prototypes later, the first Stargazer skillet was born. Huntley spent the whole summer producing his first batch of 250 skillets, working tirelessly from dusk till dawn.

Stargazer skillets begin at the company’s foundry in Wisconsin, where they smelt iron ore and pour it into green sand molds to produce the raw-cast cookware.

Rough and porous, the vessels are sent to the state of Ohio, where they’re loaded on a custom-built fixture, and their interior surface gets smoothed out on a machine.

Finally, the skillets travel to Allentown, Pennsylvania, where they go through a rigorous inspection and a hand-finish process to give them a sleek and polished cooking surface that, as the brand advertises, holds on to the seasoning—not your food.

The skillets are hand-seasoned using a blend of canola oil, grapeseed oil, and sunflower oil that gives them a bronze color and that makes them ready to cook with as soon as you’ve taken them out of the box.