Tefal (also known as T-fal in the United States) is the company we have to thank for non-stick cookware. In 1954, its founder was the first person to coat a frying pan with Teflon after seeing its utility on his fishing gear.

Regular readers of this blog know that I’m not the biggest fan of ceramic or non-stick cookware. On any day, I’d reach for my trusty stainless steel frying pan or cast iron skillet before whipping out a non-stick pan.

Yet, a fair share of my readers don’t necessarily share my views and enjoy the convenience of cooking foods on pans that don’t stick. Given that this is Home Cook World, and not Jim-Writes-Only-What-He-Cares-About-World, I listen.

So I’m starting a series of posts intended to answer your top questions about some of the best-known non-stick and ceramic products on the market. Who knows, if this becomes a thing, I might even extend it to brands known for making cookware from other materials.

In this post, I’ll cover Tefal (or T-fal, depending on where you live). I’ve done quite a bit of research on the most common questions that people ask about the products of this brand.

Still, if you couldn’t find your question, please raise it in the comments below. I’ll try to update the article with it shortly after ;).

What Is Tefal (T-fal) Cookware Made Of?

Tefal is a French company that makes cookware, kitchenware, and cooking appliances. Above all, it’s known for its non-stick pans and, in recent years, it has expanded its product lines to include ceramic pans.

Tefal’s pans are best known for the company’s patented thermo-spot, a part-red indicator at the center of the cooking surface that turns full-red to signal to you when your frying pan is hot enough to cook in: 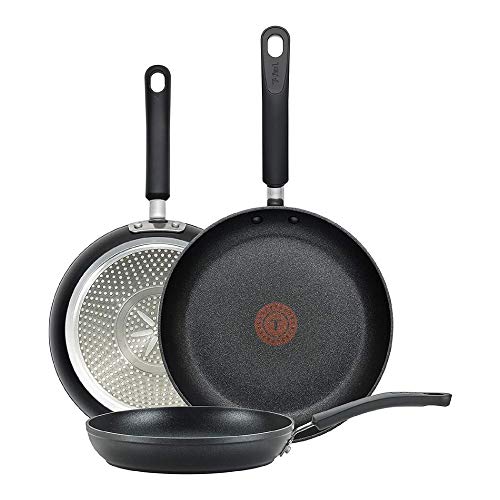 Depending on the product line and model, the handles can be made from stainless steel, silicone-coated stainless steel, pure bakelite, or rimmed bakelite. Some handles are riveted on; others bolted on; third ones detachable (and replaceable)

The ceramic coating is made of sand, also known as silica or silicon dioxide, that’s sprayed on the cooking vessel using a sol-gel process and baked on at high temperatures so that it fuses with the metal body.

The non-stick coating is made from polytetrafluoroethylene (PTFE), a stable, inert, and non-reactive material that most home cooks know as Teflon (the brand name for the chemical belonging to the company that discovered it in the 1940s).

Basically, Teflon and PTFE are two terms for the same thing. One is a brand and registered trademark, the other a scientific name. Only The Chemours Company, a spin-off from DuPont, can produce Teflon, while any chemical company can produce PTFE (and give it a different brand name).

When it was discovered that perfluorooctanoic acid (PFOA), a chemical commonly used in producing PTFE coatings, was potentially harmful to human health, Tefal was one of the first companies to stop using it.

Where To Find My Tefal (T-fal) Pan’s Model Number?

To complete your Tefal warranty registration, you need to enter your frying pan’s Model Number and Universal Product Code (UPC) on the company’s website. The Model Number should be on the box that your cooking vessel was shipped in, and the UPC should be printed on the label under the barcode.

If you plan to throw the pan’s packaging shortly after you’ve unboxed it (as most people do), take a photo of the Model Number and UPC number with your phone first.

How Do You Season a Tefal (T-fal) Pan?

While there’s no need to season ceramic cookware (in fact, it can be detrimental to its non-stick properties). However, it’s a good idea to season your Tefal non-stick pan before using it for the first time.

It’s also something that the company recommends in its usage and care guide (both the U.S. version and the Australian version) as well as on its Malaysian YouTube channel.

To season your Tefal non-stick pan or pot, clean it by hand with soapy water and pat it dry. On your stove, heat the pan on low for 30 seconds, take it off the heat, and grease the cooking surface with 1 tablespoon of cooking oil using a paper towel.

Theoretically, you could use any cooking oil. However, I recommend going for one with a high smoke point, such as avocado oil, rice bran oil, safflower oil, soybean oil, or corn oil.

Should You Use Cooking Spray in a Tefal (T-fal) Pan?

Don’t use cooking spray in a ceramic or non-stick frying pan; it can build up on the cooking surface and cause foods to stick.

Tefal pans and pots are generally safe to use in the oven. The maximum operating temperature depends largely on the handles of the specific model and the material they’re made from.

Pans and pots with bakelite handles are safe to use in the oven at temperatures no higher than 350°F (175°C) and for a maximum of 60 minutes at a time. Do not exceed the time limit, as the prolonged exposure to the heat of your oven can damage the handles.

Cooking vessels with bakelite handles with trims can only be used on your stove and should never go in the oven.

When in doubt, check the instructions for your model in the usage and care guide.

Tempered glass lids on Tefal pans and pots are generally oven-safe at temperatures of up to 350°F (170°C). If you want to use your pan in the oven at a heat higher than that, you must first remove the lid.

If the knob on the glass lid is made of bakelite, the maximum temperature stays the same, but you shouldn’t use it in the oven for more than 60 minutes at a time, or you may permanently damage the lid.

Glass lids with bakelite knobs with trims and glass lids with steam-vented knobs are not oven safe and must never be used in the oven.

When in doubt, refer to the usage and care guide for your model for specific instructions.

Is T-fal the Same as Tefal?

Yes, T-fal and Tefal are two brand names for the same products made by the same organization. One is used only in North America and Japan, whereas the other is used worldwide.

Tefal is a French manufacturer of cooking vessels and kitchen appliances and a subsidiary of Groupe SEB, the world’s largest cookware company. In the U.S., Canada, and Japan, Tefal markets its products as T-fal.

Is T-fal Cookware of Good Quality?

While there are cheaper and higher-end cooking vessels on the market, T-fal pans and pots are a sensible choice for your daily cooking. They sell at a reasonable price, heat quickly and evenly, and last relatively long for ceramic or non-stick cookware.

With that being said, some models are better than others. So, before you hit that buy button, be sure to read other customers’ reviews.

How to Pronounce T-fal and Tefal

T-fal, the company’s brand name in Japan, Canada, and the United States, is pronounced in American English as tee·fal.

Tefal, the company’s original and predominant brand name, is pronounced in Commonwealth English as te·fall.

The main difference is in the pronunciation of the last two letters of the brand. In American English, it’s closer to the “al” of “allow.” Whereas, in Commonwealth English, it sounds much like the “all” of “ball” or “fall.”

Why Is It Called Tefal?

“Tefal” is a play on words. It combines the first three letters of Teflon, the brand name for polytetrafluoroethylene(PTFE) that belonged to DuPont, which it spun off to The Chemous Company in 2015, and the first two letters of aluminium, the French word for aluminum.

Tefal is a subsidiary of Groupe SEB, French cookware, tableware, and consumer appliances conglomerate founded in 1857 and headquartered in the commune of Écully in eastern France.

Where Is Tefal Cookware Made?

Some Tefal cooking vessels are still made in south-eastern France, in the company’s production site in the commune of Rumilly. In recent years, an increasing number of Tefal products and/or product parts are being made at one of Groupe SEB’s seven factories in China.

Keep in mind that, as with most other brands’ cookware, Tefal products made in France may also feature China-made parts in their construction.

Tefal was created by French engineer Marc Grégoire, who came up with the idea for non-stick cookware while watching his wife struggle to fry an egg in a sticky pan.

An avid fisherman, Grégoire had seen the utility of Teflon on his fishing gear, and he started to wonder what would happen if he coated his wife’s cooking vessels with the slick material.

Happily for the rest of the world, his wife was supportive. The Teflon-coated pans and pots were so effortless to cook with that he founded a cookware company, Tefal, in 1956.

In 1968, Grégoire sold Tefal and its five European subsidiaries (in Denmark, the Netherlands, Belgium, Germany, and Italy) to Groupe SEB, which remains its present owner to this day.